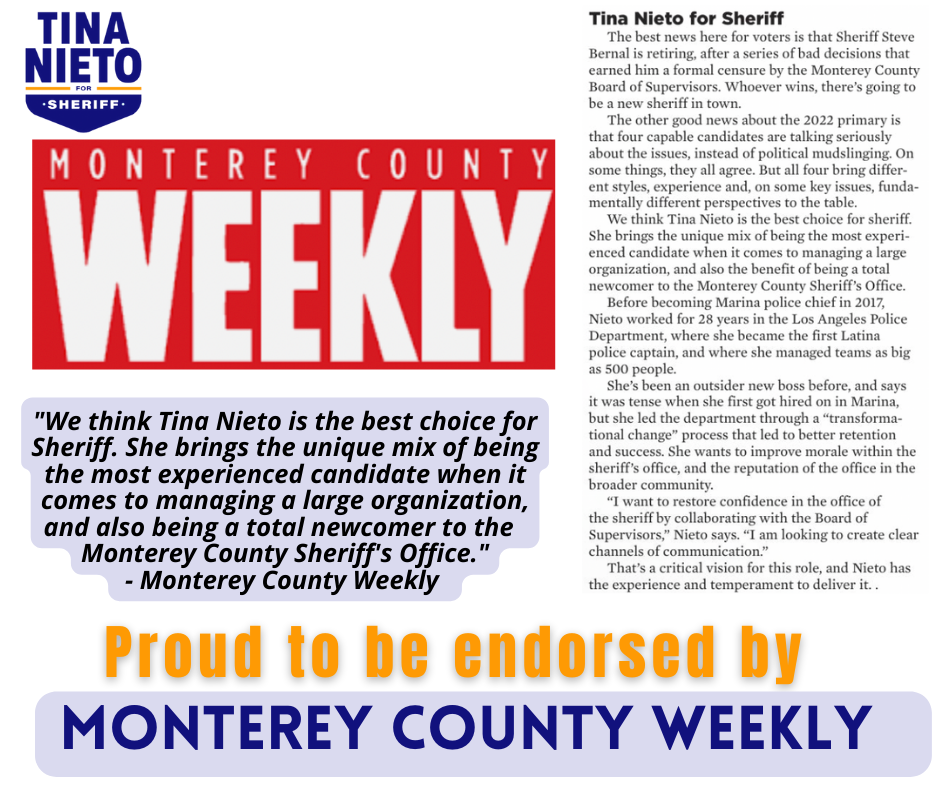 ENDORSEMENT ALERT- Monterey Weekly!
"We think Tina Nieto is the best choice for Sheriff. She brings the unique mix of being the most experienced candidate when it comes to managing a large organization, and also being a total newcomer to the Monterey County Sheriff's Office."
- Monterey County Weekly.
I am honored to have the confidence of our press, who as watchdogs have the unique power to hold people and institutions accountable. Thank you!
Learn more & DONATE to ensure a win for us all on June 7

"The best news here for voters is that Sheriff Steve Bernal is retiring, after a series of bad decisions that earned him a formal censure by the Monterey County Board of Supervisors. Whoever wins, there’s going to be a new sheriff in town.

The other good news about the 2022 primary is that four capable candidates are talking seriously about the issues, instead of political mudslinging. On some things, they all agree. But all four bring different styles, experience and, on some key issues, fundamentally different perspectives to the table.

We think Tina Nieto is the best choice for sheriff. She brings the unique mix of being the most experienced candidate when it comes to managing a large organization, and also the benefit of being a total newcomer to the Monterey County Sheriff’s Office.

Before becoming Marina police chief in 2017, Nieto worked for 28 years in the Los Angeles Police Department, where she became the first Latina police captain, and where she managed teams as big as 500 people.

She’s been an outsider new boss before, and says it was tense when she first got hired on in Marina, but she led the department through a “transformational change” process that led to better retention and success. She wants to improve morale within the sheriff’s office, and the reputation of the office in the broader community.

“I want to restore confidence in the office of the sheriff by collaborating with the Board of Supervisors,” Nieto says. “I am looking to create clear channels of communication.”

That’s a critical vision for this role, and Nieto has the experience and temperament to deliver it. .

Other candidates bring their own qualifications. Jeffrey Hoyne is the chief of the Del Rey Oaks and Monterey Regional Airport police departments, which he helped lead the process of merging. He says he’d run the office more like a business, which is as specific as he gets with a proposal to solve chronic budget challenges.

Justin Patterson is a sheriff’s deputy with zero management experience. He’s the only candidate who wants to bring federal ICE officers back to the jail (no longer allowed in California) and is mostly concerned about how the promotions process works within the Sheriff’s Office. That process is indeed worth revisiting given ongoing concerns about favoritism and a good ol’ boys’ club, but we aren’t persuaded he has the leadership skills needed to reform it.

Joe Moses is currently a captain in the Sheriff’s Office, and has worked in the department since he was just starting his career in 1994. He oversaw the county jail through the Covid-19 pandemic – with outcomes he is proud of, although in our take the jail continues to struggle with health and safety issues – and he’s endorsed by the outgoing sheriff. We think that’s a downside, and it’s time for someone from the outside, without the political baggage that plagues the sheriff’s office, to take over with a clean slate.

Moses has been embroiled in internal political drama in the past.

In the 2018 election, he and two colleagues (all commanders at the time) publicly accused Bernal’s challenger, Deputy Scott Davis, of embezzlement. Their battle led to a schism in the union, and it also led to a defamation lawsuit against Moses and the two other commanders.

The suit was quickly tossed out of Monterey County Superior Court, but just last month, the Court of Appeal overruled the local decision, and sent the case back. Then the Monterey County Board of Supervisors made a dramatic choice to stop covering the defendants’ legal fees – an unusual distancing between the county and a county employee. Moses continues to maintain he acted appropriately, despite an Attorney General investigation that yielded nothing and no criminal charges.

These kinds of murky, backroom political antics continue to burden the sheriff’s department – it’s time for new leadership distanced from all of this.